Exhibition at Galerie Nord / Kunstverein Tiergarten Berlin in the frame of the European Month of Photography, October / November 2016 The exhibition comprises 3 series of 10 photographies that are dealing with social and political phenomena of Israel today. His themes are: the decay of the utopian vision of the first settlers, the way to treat ethnical and religious minorities and the neccessary absurdity of the israelian military. Ilan Nachum is dealing with these intricate, deeply ideologicaly and religiously rooted issues with great intelligence and ease, completely undogmatic and without any pathos. He virtously plays with the possibilties of documentary photography. Always keeping the necessary distance, his deep envolement in – and commitment to the photographed subject, life in israel, its problems, absurdities and beauty, is strongly perceptible. 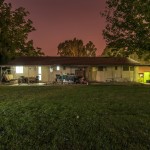 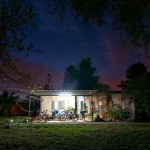 „… Kibbutz is an experiment that did not fail.“ Martin Buber In 2009 the Kibbutz movement celebrated its 100th anniversary. The long lasting and influentual utopian, socialist experiment started with the foundation of the first Kibbutz, Degania, in 1909. Over time it evolved and underwent changes, but its primary idea, the equality of all members, remaind, more or less, untouched. „From each according to his ability, to each according to his need.“ In the 1980s, with the privatization of the kibbutzim – different levels of income and private ownership – this primary quality begins to vanish. The loosening of the communal bonds in the Kibbutzim seems to go hand in hand with a change in the collective thinking of the Israeli society. In 2009 Ilan Nachum started a series of photographs, that, at first glance, document the typical housing of Kibbutzim. Underlyning the documentary appeal of the photographs is his use of similar angles and light situations, following the idea of the well-known german photographers Bernd and Hilla Becher: to define a type by the slight differences that become obvious when the objects are isolated and than aggregated in a sequence. Looking at the differences between the work of the Bechers and Ilan Nachum we find the core of his work „privatized.“ The Bechers document landmarks of a declining industry – connected with specific forms of technology and societies – that were often dismantled soon after they were photographed. Due to these circumstances the photographic representations become monuments of the photographed objects. Referent and sign fall in one. Ilan Nachum´s work is transcendent in a different way. His objects will remain. He is documenting a declining idea. He turns the usual iconography of the representation of life in a kibbutz – groups of children playing together, groups of people working together- upside down. The dwellings he photographs seem to be abandoned. The inhabitants that appear in a few of the pictures seem isolated and ghostlike in the bright light. In a strange but factual way the dwellings change their meaning from being representations and symbols of an egalitarian utopia to images of a classical suburban lifestyle.

One hour at the beach 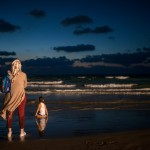 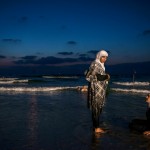 This sequence shows the most crucial point of israeli social life: the coexistence of diffrent religious groups. The beach is a surrounding, where the social interactions of groups and individuals can be perfectly surveyed. It offers an almost neutral and empty space, in which the choice, where to settle yourself is determined by the relation towards others. The groups represented in the photogaphs are secular israelis and arabic muslims, easily identified by their divergent dress codes. Even when together, it is obvious, that there is no interaction between them. The art of Ilan Nachum shows people in an overwhelming and elementary set-up of beach, ocean and sunset. The chosen time – the sun has set and darkness sets in – is augmenting the existential expression of the work. The sheer beauty and intensity of the scenery integrates the various attitudes and shows people as they are: human beings enjoying and understanding life in respect to the elements of nature. Ideas of social or religious segregation seem vain. 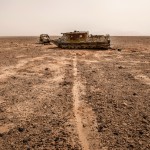 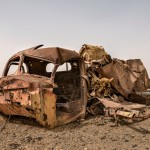 This series is the most recent work of Ilan Nachum and it still is a work in progress. He has access to a restricted army district inside the Negev Desert, where he found constellations, that at first sight are reminiscent of landart pieces : strange constructions mounted on top of artifical hills, weird objects and circular arrangements. Placed within the wide and empty desert landscape they create a surrealistic impression, similar to the paintings of Dali or Tanguy. Looking closer at the objects an additional aspect comes into play: the objects are composed of scrap – military residue as well as refrigirators, metal bedframes, car parts, old barrels, etc. The objects are used as targets for the Israeli Air Force. They, in an almost touching way, are mimicking radar stations or rocket launches. The camera, as a documenting tool, is preserving a utilitarian fake, a manipulated reality. Layers of „The Real“ and the imaginary melt under the relentless desert sky.

The exhibition was supported by: